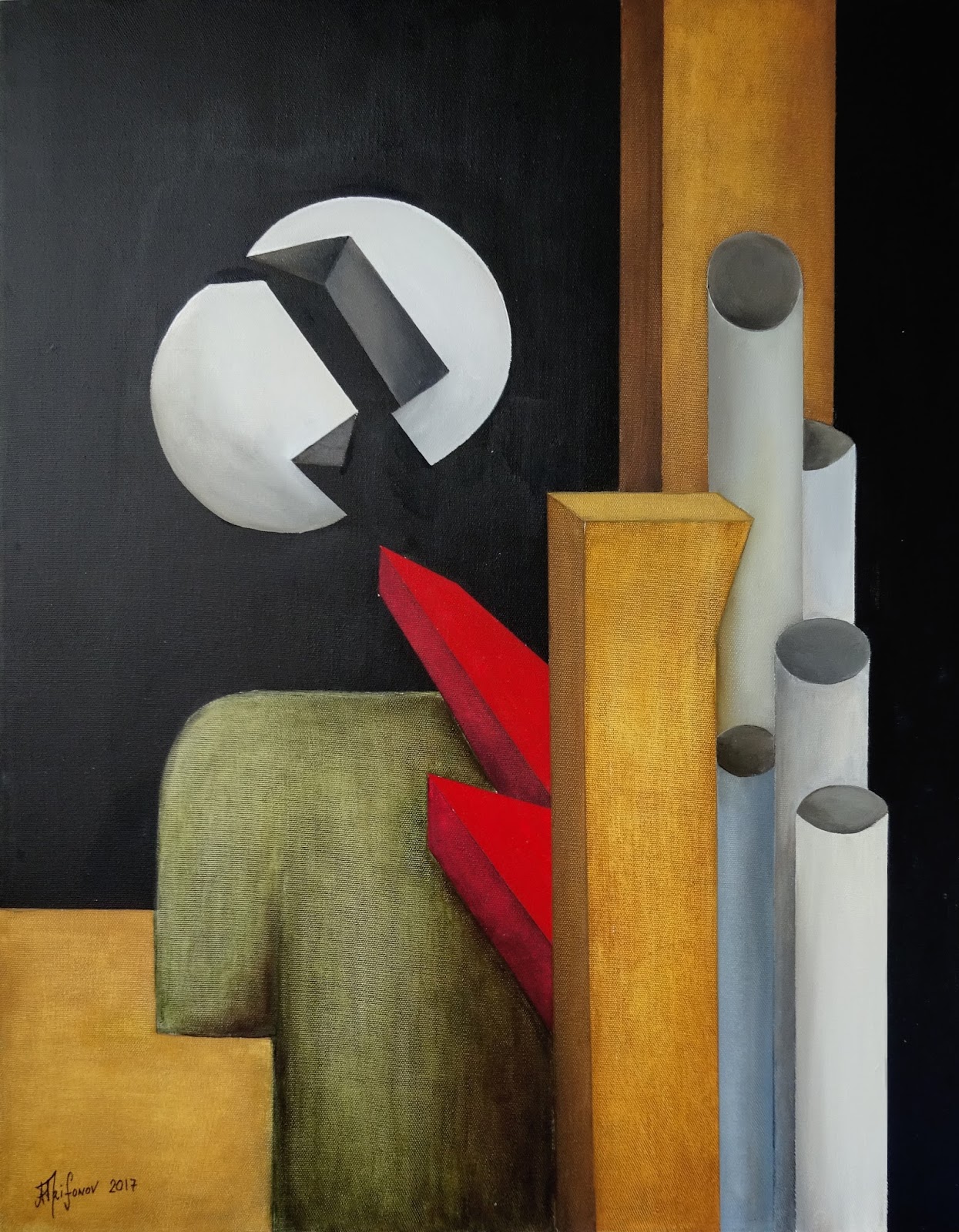 Александр Трифонов "Кассандра". Холст, масло, 90х70 см. 2017
Alexander Trifonov Kassandra. Oil on the canvas, 90x70 cm. 2017
Alexander Trifonov was born in 1975 in Moscow. Studied at moscow polygraphic institute. He received an education in design and worked with Moscow theaters since early 90s. Since 1998 he’s working with Moscow Art Theater and also creates interior designs for magazines and advertising agencies. A member of the Artists’ Union of Russia, he exhibits his works in many group and individual exhibitions every year. His exhibition of 2006 in the most well-known “A-3” gallery in Moscow has been opened by Eduard Drobitsky, President of the International Federation of Painters, UNESCO. In 2005 a book (256 p.) about the artist with his art, articles and comments has been printed in Moscow, is a noted follower of the modern avant-guard art concept known as receptualism. Alexander has been called a Leader of the Third Russian Avantgarde.
“To be a painter for me is to create my own world”, says Alexander Trifonov. “And we can only acknowledge he has what it takes – everything he creates has consistency and originality of the artist. You can’t take his world for someone else’s”, says Evgeny Rein, a poet.
Select personal exhibitions:
• End of ideologies, At Kashirka gallery, Moscow (February 1999)
• Love to a Bottle, A3 gallery, Moscow (January 2000)
• Our Street, At Kashirka gallery, Moscow (October 2001)
• Bottlefly, A3 gallery, Moscow (March 2002)
• New century, “Centaur” gallery (May 2003) with the sculptor Dmitry Tugarinov
• Bolero, A3 gallery, Moscow (August 2003)
• On Stage of Eternity in the Russian Academy of Arts (September 2005)
• Shostakovich. Bolt, A3 Gallery, Moscow (April 2006)
• Exhibition in the Theatr na Taganke (November 2006)
• Our Street -100, State Literature Museum, Moscow (March 2008)
• Corner stone, Art Gallery Na Solyanke, Moscow (June-July 2009)
• The window, Gallery "Chistie prudi", Moscow (2012)
• “Windows” with Miloš Prekop gallery Aircraft, Bratislava (2014)
• "In parallel' in the Open Club Gallery, Moscow (2015)
Select group exhibitions:
• “Young Russia”, Moscow and New York (1997)
• Auction Drouot-Richelieu, Paris (1997)
• “Anti-Soviet exhibition, dedicated to the 80 years of the Great October”, Moscow (November 1997)
• “Contemporary Russia” Jersey City /USA/ (1998)
• “International Art Biennale Malta” (2003)
• ”Re-cept Triumvirate” with Igor Snegur and Vitaly Kopachev, A3 Gallery, Moscow (December 2006)
• ”Three stars in A3 Gallery” with Igor Snegur and Vitaly Kopachev, A3 Gallery, Moscow (December 2007)
• Exhibition dedicated 130 years Kazimir Malevich, Nemchinovka (Februar 2008)
• Group exhibitions of contemporary moscow artists, A3 Gallery, Moscow (2008-2010)
• Makek Gallery in Croatia Rab/Zagreb (June 2010)
• «Anticipation of our future» Bratislava, Nitra, Slovakia (Oktober 2010)
• «Creative environment» Central House of Artists, Moscow (2010)
• PEOPLE-metr Czech Republic, Slovakia, Hungary and Poland (2011/12)
• «Time of wanderings East West» Central House of Artists, Moscow (2012)
• "Kladensky salon" Kladno (Czech Rep. 2012)
• «White+Blue+Red» Trnava, Bratislava (Slovakia 2011/12)
Shagal gallery in Ostrava (Czech Rep. 2013)
• PEOPLE-metr-2013 Czech Republic, Poland, Hungary (2013)
• "Bijela. Plava. Crvena" gallery Milotić. Pula (Croatia, 2014)
• «Other Reality» Central House of Artists, Moscow (2015)
• «From Avantgarde to Avantgarde» Museum of Fine Arts in Saransk (2015) and in Togliatti (2016)
Receptualism is a new direction in the modern art, actual presently.
Receptualism is style use of all possible languages and the directions of this or that art form in one work. It is a certain new level of a postmodernism at which, however, as well as always, the main thing is the talent of the artist.
Receptualism allows to use realism and abstractly is a that art form in which there are no other last “isms” and perfectly lives with the modern person, design and architecture…
Receptualism imitates nothing and nothing reflects: art is created from art.
Here is some positions of manifesto:
Cancel all! - Receptualism - art of the Third millennium.
Receptualism - art of the second reflection: most from - creativity and - at the same time - most in - interpretation (long live two-faced Janus).
Receptualism consists of three parts: creation of the work, demonstration of a cultural product and demonstration of demonstration - the second reflection of creative process of the artist-receptualist.
A Receptualist aims the thinking and activity on art process, instead of a object of art (which can be zero as "A black square" Malevich).
Hierarchy of art process enter: 1) personal (or group) creation and demonstration of a object of art; 2) author's reflection and text maintenance of a object of art; 3) author's and tracking of movement of a object of art in world cultural and historical process.
Receptualism approves fundamental laws of the nonlinear theory of art:
development of art is immutable;
development of art is irreversible;
art, as God, is immortal;
immortality is found in a sign.
Founders of the concept of a receptualism: academician Slava Len, writer  Yuriy Kuvaldin, artist Alexander Trifonov.
Subscribe
Comments for this post were disabled by the author